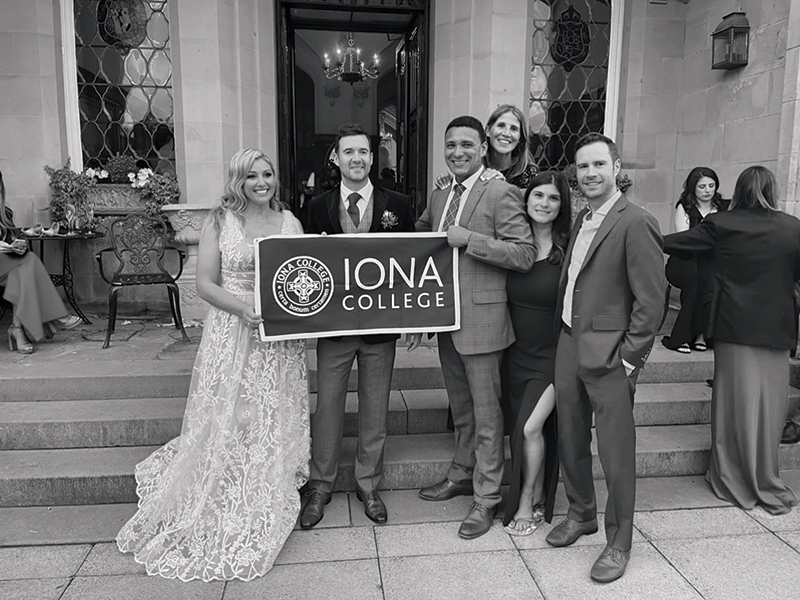 1964
Anthony R. Pasqua ’64 was recognized by Continental Who’s Who.

1966
George R. Sullivan, CPA, ’66, was named Veteran of the Day by the U.S. Department of Veterans Affairs.

1973
Kevin M. Kane ’73 earned the California Association for Coordinated Transportation (CALACT) Wall of Excellence Award, given to individuals who have a long and distinguished career in public transportation.

1977
Joseph A. Brady ’77 took his final bow as a bagpiper during the St. Patrick’s Day Parade in NYC.

1978
Sharon L. Preston-Folta ’78 revealed that she is the daughter of Louis Armstrong in an article.

Eileen T. Cahill ’82 was appointed to the ElderHouse Board of Directors.

1984
Glenn J. Horine ’84, ’91MBA is leading a division within the company Underdog Venture Team, where he works to promote diversity in the sports industry.

James P. Agnello ’84 participated in a race honoring the hospital that delivered him and his two brothers.

Jane E. Chero ’84 was hired by The Media Matters as director of client engagement.

1987
Eileen A. Ivers-Mulligan ’87, ’19H and her band will headline “Eileen Ivers: A Joyful Christmas” at The JPT Film & Event Center in December 2022. Eileen also published a book called, “Will Someone Play Bluey?”

Robert J. Darling, USMC, ’87 served as a liaison between the Pentagon and Vice President Dick Cheney in the underground bunker at the White House.

1988
Patrick C. Dunican Jr., Esq., ’88 was honored with a portrait in a dedicated conference room at Gibbons P.C.

Rose S. Luangisa ’93, ’96MBA, founder of the Luangisa African Gallery, partnered with ArtsWestchester for a showcase of the gallery’s collection of goods.

Yasmin Quiles ’98 was featured in The New York Times, highlighting her vows and story of her marriage.

Michael T. Mondrone ’98 was featured in The New York Times, highlighting
his marriage.

Angelo J. Amato ’00 created a short film called “Coming Home,” which made the quarterfinals of the Big Apple Film Festival.

2004
Kwame A. Moses ’04MBA was appointed chair of the Liberation Programs, Inc. Board of Directors.

Bryan Auld ’06 got married in Scotland.

Kiril A. Wachsman ’06 competed in the Basketball World Cup Qualifier.

2008
Gabrielle Gambrell ’08, ’10MA was featured on PR News Online, discussing the relationship between controversy and publicity.

2014
Sarah E. Lonergan-Rothschild ’14 was named to the Wunderkinds 2022 by 914Inc and Westchester Magazine.

Kelsey Gilmore ’17 presented her Master of Fine Arts thesis at the Department of Art at Western Connecticut State University.

Melissa Strauss ’20MBA was recognized by Business Council Westchester’s 40 under 40.

Jake L. Liberatore ’21 is playing baseball at Hofstra while pursuing a graduate degree.

Brendan C. Smith ’21MA was signed by the Winnipeg Goldeyes.

Pathea Bruno ’21 is furthering her academic research thanks to a grant by the National Institute of Health.

2022
Katherine Meyer ’22 was featured in the Times Herald-Record, discussing life after college.